We are OPEN and accepting new cases. Telephone and Video Conferences Available.
Over 65 Years Experience
Winning Cases.
Compassion That Gets Results.
Contact Us for a Free Consultation
Associated With:
Home
Communities Served
Motor Vehicle Injuries in Washington
Everett 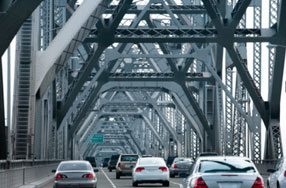 Over the last decade, traffic in the greater Seattle area has become progressively worse. For example, the entire Interstate 5 corridor, from Everett all the way to Tacoma, is frequently congested, particularly during rush hour. With the expansion of Boeing and other businesses in the north end, Everett roads have become more and more crowded as more people commute to and from Everett. Congestion is exacerbated by the fact that other traffic must pass through Everett en route from Canada or northwest Washington to other parts of the state. With more cars on the road, there are more opportunities for crashes to occur.

Ever since motorized vehicles have been our primary mode of transportation, crashes and accidental injuries have been an unwanted result. Over the years, car designs have been made safer, highway design has been improved, and public education campaigns have increased seat belt use, and informed drivers of the importance of obeying traffic laws, keeping a safe following distance from other vehicles and staying off the roads while intoxicated. In spite of precautions taken by most drivers, it only takes one bad driver to cause a serious wreck.

Our firm has extensive experience handling all types of motor vehicle injury and death cases. Some examples include:

Although our office is located in Seattle, we handle injury cases all over Washington. As part of the investigation we conduct, particularly in cases involving unique collision facts, we often visit the location of the crash to make sure that we can fully visualize what occurred. We take photographs of the scene, which may be used as part of a settlement demand sent to the insurance company. We have found that we are able to obtain better results for clients when we collect the evidence necessary to paint a very clear picture of the crash for the insurance company. Without clear and specific evidence, it is much easier for insurance adjusters to minimize the severity of the crash and your injuries.

Dealing with insurance companies can be frustrating and overwhelming, especially for people who are also in the process of recovering from injuries. In auto injury cases, the insurance company’s goal is to pay the very least amount of money they can get away with in order to settle claims. This is often achieved by pressuring claimants into early settlement before the full extent of their injuries has been determined, by blaming claimants for their own injuries, or by providing claimants with incorrect information about their rights.

We recommend that anyone with a car accident injury or death claim consult a lawyer before accepting any settlement from the insurance company. A qualified lawyer will be able to advise you of your rights, and will be able to help you avoid common pitfalls that can result in inadequate compensation paid to claimants. By hiring an a lawyer experienced in handling car crash injury and death claims, you put yourself in the best position to obtain full and fair compensation.