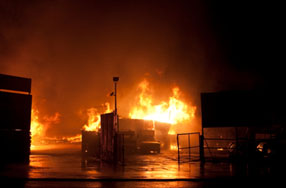 There is no such thing as a “minor” refinery explosion. After a massive explosion killed five and injured two workers at an Anacortes, Washington refinery in April of 2010, investigators from the U.S. Chemical Safety and Hazard Investigation Board and from the Washington State Department of Labor and Industries scoured the accident scene, looking for clues as to the cause of the explosion. Ultimately, the injured workers and their families discovered a trail of negligence that led back more than a year before the explosion, when the refinery owner was cited for 150 safety and health violations.

Just one month after the enormous explosion in Anacortes, another devastating blast rocked a San Antonio refinery, where one worker suffered critical injuries. That explosion was triggered by negligence during a truck refueling procedure.

Last year, several Washington refinery workers were exposed to an uncontrolled release of toxic gases when a subcontractor introduced oxygen into a sulfur trap that contained a combustible cleaning catalyst designed to be kept in an oxygen-free environment. A year later, not all are back to work.

Don’t be Intimidated Because You Live in a “Company Town”

Huge quantities of highly flammable liquids are stored at refineries, along with great concentrations of volatile compounds and gases that are used – or byproducts of – the complex petroleum refining process. With so much “fuel” present, a small fire or a negligent misstep can bring about a major disaster. And when disaster strikes, because the economic health of the communities where the refineries are located often makes those communities seem like “company towns,” the injured workers and their families often feel under pressure to take their workers’ compensation benefits and not rock the boat.

Because we are a Seattle-based personal injury law firm, Kraft Davies Olsson PLLC has no “company town” loyalty. Our sole motivation is to help our injured clients. If you or a family member has been injured by a refinery explosion, we can help you learn how and why you were injured, and tell you exactly what you can do about it. If, as typically turns out, the explosion was caused by negligence or a failure to follow governmental safety regulations, we will help you win compensation for your injuries and financial losses over and above the minimal benefits that are paid by the Department of Labor and Industries under Washington’s workers’ compensation system.

To get started, all you need to do is call us. We will conduct our own factual investigation, read your medical history, and advise you as to the value of your claim. We are tried and tested personal injury lawyers who only get paid if we win, so we know how to win personal injury cases. Our track record, as shown on our verdicts and settlements page, speaks for itself. We represent injured workers from all over the state, in every county and federal court in Washington. If you hire Kraft Davies Olsson PLLC, you will pay us no fee unless we win financial compensation for you!

For your free, no obligation consultation, call Kraft Davies Olsson PLLC today at 206.624.8844. Alternatively, you may email your inquiry to us by clicking here.